Mahler's moving masterpiece in the piano version of the composer.

Embedded in the concert is a historically reconstructed, fateful conversation of the composer with his American doctor Dr. Libman in New York.

Enjoy a showreel with the highlights of the concert of September 12, 2020.

Recital with Gustav Mahler:
Songs from the Wunderhornlieder and Kindertotenlieder

Concerts of the Munich Piano Trio

Tickets available at the door

Concerts with the Eliot Quartet

The arrangement of the piano concertos without wind instruments was suggested by Mozart himself as a possible version. In the advertisement of the first edition from January, 1783, Mozart notes that the concertos “could be performed with a large orchestra with winds, but also as well with a quartet for 2 violins, 1 viola, and cello, without winds.”

The professional recording team of the opera house has captured the special atmosphere of the moment in close-ups of rich sound and color.

"The Munic Piano Trio plays the pieces with noble precision, stylistically following more the references than a conception of juvenile agitation."

"This performance by the Münchner Klaviertrio ... serves more to bring out the accomplishments of the young composer. ... This is a highly rewarding release, which clearly shows the progression of Richard Strauss the composer and which any self-respecting Straussian will relish. Strauss is clearly evident in patches of this music, especially in the piano writing of the Piano Quartet, and the Münchner Klaviertrio bring this out expertly. ... the recorded sound is also clear and detailed."

The late romantic Cello Sonata, Opus 19 and the Piano Quartet, Opus 29 of Georg Schumann, a contemporary of Richard Strauss, appears in September 2014 on the cpo label.

These neglected masterpieces, which until now have not been recorded, are sure to raise high interest among critics, musicians and most important, listeners!

In 2016, the Munich Piano trio has marketed two master compositions by Robert Schumann: the Piano Trio Opus 80 and the Piano Quartet Opus 47 with Tilo Widenmeyer as violist. It is the eights GENUIN-CD of the ensemble.

The CD was promoted on February 22, 2016 in the broadcasting Tonart-Klassik of Deutschlandradio-Kultur.

The Best Classical Music of 2018
– The Best Performances – 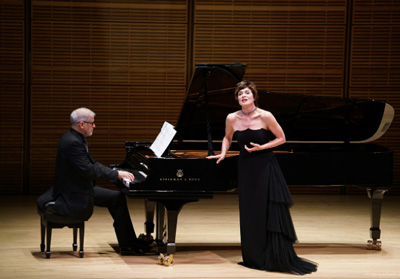 “One of our most essential singers arrived for a rare New York recital in February at Zankel Hall. It was a quietly shattering yet deeply satisfying evening, a study in aging, nostalgia and death pursued through ripe Respighi songs, autumnal Nadia Boulanger, changeable early Britten, wryly pained Poulenc. (And, as encores, exquisitely shaped Frescobaldi and an almost murmured Habanera from “Carmen.”) No program notes, no speeches from the stage: She treated her audience like adults, sharing an intimacy charged with mystery.”

Live Recording of the Recital on December 7, 2013

Live video recording of the inaugural concert of the Teatro Comunale in Savona — 2nd October 2010!

Poulencs master composition from the opening recital of Radio 3's Lunchtime Season 2015 live for the BBC with Fiona Talkington and an enthusiastic public.

Click on the left arrow in the player, to hear the music!

Acclaimed song recital in one of the world's most important recital venues: Lunchtime Concert live on BBC (Radio 3) with Sarah Walker and compositions of Fauré, Hahn, Bachelet, Respighi, Zandonai and Mascagni.

Click on the left arrow in the player, to hear the music.

Camille Saint Saëns Le Cygne from The Carnival of the Animals in an exemplary Live Performance of the Kissinger Sommer on June 21, 2015 with Danjulo Ishizaka (violoncello).

Click on the left arrow in the player, to hear the music.

Live Recording with the Eliot Quartet